Book Blast, Giveaway & Interview: The Only Sorceress by @AnyaBreton 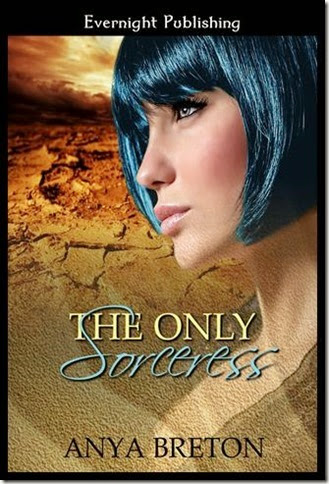 Self-proclaimed sorceress Kora Walsh knows exactly how to use her shiny new MBA. She’ll open a new age shop in a colony of the country’s most powerful witches. But the town rife with bigots doesn’t want her or her sleek shop tainting their perfect community.

Kora would leave if she had any choice in the matter. She’s trained from childhood for her true task—infiltrating coven leadership as her mother’s mole. Failure to do her familial duty is not an option, not when her childhood nemesis is assured her failed soul for an eternity of torture.

And thanks to the colony’s loudest supporter, the beautiful Desmond Marino, failure is a very real danger.

I might have considered the hotness factor of the guy in the tailored suit standing on my porch if I hadn’t been operating on three hours of sleep. Instead, I repeatedly rubbed the crust out of my eyes and contemplated what kind of insurance he could possibly be selling.

Was there a company that insured members of the Underground against accidents? Whatever it was, it would cost me an arm and a leg because the outfit covering his sinewy body couldn’t have had a price tag for less than a thousand dollars.

“Yeah?” I asked over a particularly aggressive yawn. It came out as “Eeeaaa?” I took the opportunity to pull my polyester robe around myself while he peered over my shoulder into my empty living room.

“I’m Desmond Marino,” the guy on my front stoop said.

The matter-of-fact tone of his smooth, masculine voice suggested he expected I’d heard of him. Likewise he didn’t extend the arm hanging beside his black silk-blend jacket to offer me a shake—the implication being he didn’t feel I deserved the courtesy. Nor did he lift his eyes from their hooded position. That gaze combined with his flat, dark eyebrows and the full lips of a Michelangelo statue gave off the impression of sensual menace. Then again, maybe it was that he was hot in an international male model sort of way with his short blue-black hair, chiseled nose, and posh wardrobe.

He scrutinized me up and down. This guy could give my nemesis a run for his money in the menace department.

What in the world had made me think of Trip now?

The smoky tang of incense floated on the air. I hadn’t burnt any, and the breeze was too brisk for it to have come from a neighbor. But no, that wasn’t incense. It was the marker of a witch.

I took a stealthy sniff while blinking slowly. The crisp note of a fresh mountain stream overtook the smoky tang. Water witch. My stomach twisted into a tight knot. Water witches’ empathic ability often caused the most trouble of the magical community.

“You are not welcome here,” he said in a voice loud enough to wake the neighbors.

Despite the volume I wasn’t sure I’d heard him correctly during my twentieth yawn of the morning. “Pardon?”

His eyes—a disturbing aqua blue not far off from my cerulean hair—somehow managed to hood more without completely closing. He was familiar. Strange, considering I’d never officially met a Water witch.

“This is a colony for witches,” he said haughtily. “You aren’t a witch. How did you get in here?”

“I signed a year lease just like everyone else,” I said, deliberately misunderstanding him.

“This is Wipuk,” he said as if he thought I’d gotten lost on my way to Phoenix. “If you aren’t a witch then you aren’t welcome. You shouldn’t have even been able to crosswithout magical ability.”

I made damn sure he saw my eyebrows shoot up to the middle of my forehead. Desmond Marino was a dick. But if he felt like he could knock on my door at whatever time it was and tell me I wasn’t welcome, then I figured he fancied himself important. I couldn’t simply tell him to stick his head in Cerberus’s maw if I had any chance of completing the task my mother had set forth for me. Infiltrating the magical community’s leadership would be a difficult task without ticking off anyone who might have their ear.

So I emulated an airhead. Guys were always nicer to stupid girls.

“Really?” I blinked vacuously blank eyes twice. “I have a shapeshifter neighbor. And over there in apartment one twenty-six are a werefox dad and son.” I pointed past Desmond the dick’s shoulder toward the building across the courtyard. I let my head tilt to the right so my hair would fall away from my cheek in a girlish way. “I didn’t know witches could be infected by Were-viruses.”

They couldn’t. Nor could a shapeshifter be born a witch. The analogy would be like a dog being born a cat.

Desmond the dick’s full lips puckered, giving him a Muppet-like appearance. “They have been given dispensation to live in Wipuk and keys to cross. You haven’t.”

“Oh gosh,” I said ruefully with noticeably slow blinks I’d always imagined equated to idiocy. “I have this letter from the Centralized Coven Coalition that says… Hang on.” I held up my index finger in the “one moment” sign. “Let me go get it. I don’t want to misquote anyone.”

I scampered to the breakfast bar where I’d dropped my laptop bag. In the stack of papers that included my business plan for my intended shop, my bank statements, and market research into the Sedona economy, was a letter from the coalition. I returned to the door as I flipped through the pages.

“Here it is,” I said in an appropriately vacant tone. “It’s addressed to Rebecca Kora Walsh.” I glanced at him. “That’s me.” At his darkened look, I continued. “It says, I quote, ‘Thank you for your recent interest in relocating to the Wipuk colony. Any faction capable of finding Wipuk is welcome to join us.’” I gave Desmond the dick my beatific smile along with a playful little bounce that sent my cerulean hair sliding away from my face. “I found it!”

His chin was flush with his collar now. The whites of his eyes were no longer visible. Clearly he didn’t enjoy my airhead act.

“Someone helped you,” he said with careful enunciation. “You didn’t simply walkinto Wipuk on our own.”

I shook my head slowly, allowing my eyes to widen in my Golly-Gee-Mr. Wilson expression. “I don’t know anyone here except for the shapeshifter I met last night and the teenage werefox who stole my boxes but brought them back. No one helped me find Wipuk. I just found it.” I gestured to the paper in my hand. “Like I said in my original letter to the coalition, I’m a sorceress. I think that’s why I was able to find the colony.”

Desmond the dick stared at my eyes furiously for three seconds as if he’d expected me to change my tune merely to please him. His next words came out in the same careful tone as his previous statement. “There is no such thing as a sorceress. You had to have help.”

There wasn’t. But he didn’t need to know that. He did need to know I could wield magic. I’d have to give him a show of it. 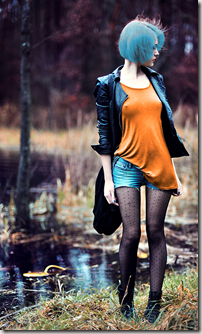 Just about everything! I have to keep so much of my history a secret that it means people can only ever know a tenth of the real me.

Well, considering my mother is omnipotent, “no one” doesn’t apply here. But most people don’t know about her, or that I’m not actually human.

Screwing up so much that I earn an eternity of torture at my nemesis Trip’s hands.

To be successful in my own right.

Single. Always single. Trip won’t let it be any other way.

Gothic mixed with punk. I always wear orange and blue hues that complement my cerulean hair.

With the goddesses and gods watching my every move, I can’t get away with rebelling too much. But I do thumb my nose at them now and then.

Finishing my degrees in between favors for my mother and Trip’s stalking.

A successful business and completing my mother’s task.

Since Trip is technically not a person, I’d have to go with Desmond the dick.

Not asking to get a Ph.D. instead of my MBA.

Why would it be different? Still integrity.

My employee Nell. She’s not afraid to do her own thing and she accepted me when no other witches would.

Never interrupt Mom and Clotho at the slots. 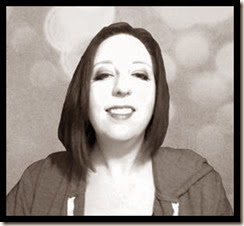 Anya Breton is a web monkey with an obsession for nail polish and rubber chickens. Her fears include Peeps and people who hate clowns. She lives in the Midwest with her significant other.