Book Blast and Giveaway: The Genesis Project by Tigris Eden 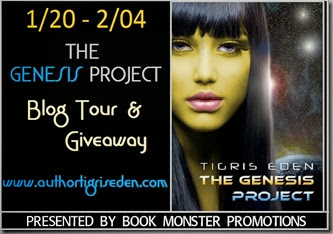 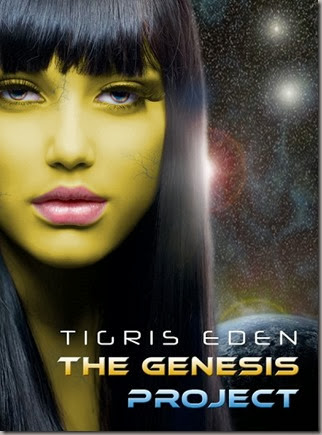 Old earth has been deemed unsuitable for life, New Earth is home. With the Uni-Wars over, races have joined together in order to sustain their way of life. All life was considered worth saving, but only one race failed to submit. Humans.
Now extinct, humans are a thing of the past. The people of New Earth won’t acknowledge their hand in their eradication, but they have benefited from it. Dr. Vaggo Blackmore has found the answer, he’s restored his races way of life- sustenance through farming. The one thing that will give them back their long lives….. Blood, human blood.
Biologically engineered in a lab, Genesis Blackmore has always been different. Her father has told her it’s due to her enhancements, the Federated Council sees her as a genetic mutation; and her fellow peers see her as the shiny new toy. Gen has had better days.
Everyone on New Earth has milky white skin, platinum blonde hair, and electric blue eyes. It’s the norm. Genesis’ glossy, black hair, ice blue eyes ringed by gold, would have almost made her socially acceptable- if it wasn’t for her golden skin and blue, gold veins. In a sea of milky white she alone is the dark anomaly.
All Pars get their life’s nourishment through blood plasma. All Pars find their match through the tasting. Gen can do neither, forbidden by her father to do so. She can neither taste, nor be tasted. Something that’s never bothered her until now.
Photo Credit: ©subbotina
An additional 30K added to the short story that originally appeared in Romantic Tales: Bedtime Stories Season One

There is really not much to say... I love to write, read, and listen to music. My attempt at a music career sadly ended at the Apollo one warm night in May. LOL (Side note: I was not booed just outdone by two munchkins rapping to Biggy Smalls, they were good.

Military brat extraordinaire; have traveled to a lot of interesting places.  This February I will be going over to the other side of the pond where I will spend two weeks in Europe.  I will be in Cambridge, London, Paris, Versailles, Bruges, and hopefully Cardiff.

The very first time I put pen to paper in story fashion (for fun), was in 6th grade.  The story was called, The Case of The Missing Pepperoni. It was a cute mystery where all the ingredients and shop appliances came to life when the store owner closed up for the evening.  See, pretty boring stuff. I always say I'm not the interesting one, but the people around me.