Book Blast and Giveaway: The Witch Who Cried Wolf by Sarah Makela 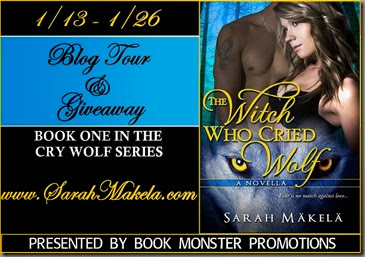 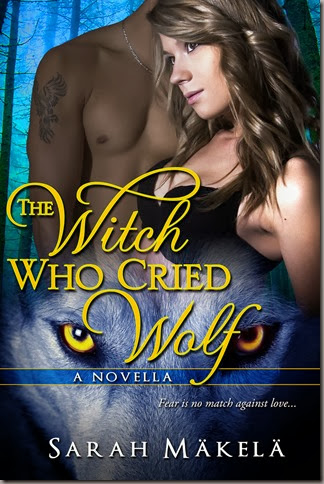 Be careful what you wish for…

A potion gone wrong: Mia Brooks is a reluctant witch, with powers that she tries to hold in check. But when her magic gets mixed up, supernatural forces are unleashed and suddenly she’s being pursued by werewolves—that she didn’t even realize existed…
Hidden emotions: Ethan Parker, Mia’s brother’s best friend, is home from deployment for the holidays. Mia’s not only hiding from werewolves, she’s trying to keep her feelings for Ethan secret; it would be a disaster if he knew she’s been nursing a long-time crush…
The power of love: Things take a terrifying turn when Mia and Ethan are attacked by a werewolf. Ethan is amazed when Mia reveals her paranormal prowess as she tries to shield them from danger. But can she really protect them from the darkness that lurks? And how can he tell her that, for ages, he’s been denying what he really wants? Mia...

Jessa’s New Age shop—Eternally Magick—was empty. Usually, Jessa was around. But, right now, she wasn’t. I leaned against the front counter, resting my forehead against the cool glass. Athames, crystals, jewelry and really cute dragon statues were locked in the case beneath my fingertips. While I enjoyed hanging out at the shop and seeing what new potions were available, I wished Jessa had given me some kind of clue as to why she wanted me here. But she was my best friend and mentor; the reason had to be important, if for nothing else to spend much needed time together.

I glanced over my shoulder at the wall of ingredients lining the shelves, ripe for the picking. It had been a while since I’d made a new potion. Maybe if I could stock up on a few things...

“Not what you’re here for,” I whispered to myself. The urge to see what she had nearly drove me away from the counter, but I held myself in check.

Making potions was one of my hobbies. I loved the creativity and excitement that went into building something from nothing, and the brief connection with my power.

Tapping my fingers on the counter, I stared at the curtained-off backroom. Worry crept into my chest. Why wasn’t Jessa here? She never stood me up. This wasn’t like her.

“Jessa?” Usually she came right out when the bells on the door chimed. Biting my lower lip, I considered going into the back. Someone could steal things without her keeping an eye on the store.

“Coming,” Jessa called. The black-haired and blue-eyed beauty swept into the front of the store like a hurricane of flowing skirts. She always looked like she’d just come from a Renaissance faire.

I loved the way she dressed, but I knew that style would never be my thing. My parents would think I’d flipped my lid, and my older brother.... Shudder. Nolan would laugh at me, probably joking with his best friend—and my crush since forever—Ethan Parker.

“Where have you been? I was getting concerned.” Stepping around the counter, I wrapped my arms around her and she embraced me in a hug smelling of lavender and honey.

“Just in the back. I had to wrap up a call and I guess I didn’t hear you come in.” Jessa smiled, but something was up. She appeared a bit too eager to pretend everything was fine.

“What’s going on? Are you okay?” I placed my hand on her shoulder, trying to be comforting.

The door chimed, and we turned in unison toward the shop’s new arrival.

I blinked in surprise.

The man towered in the doorway, over six feet of pure muscle. If his shirt were a little tighter, I probably would’ve been able to see six-pack abs through it. What was he doing here?

He strode in as if he owned the place. There could be no doubt: ladies would drop their panties at his command. If I didn’t have a boyfriend.... Stop it, Mia!

“I’m looking for the owner,” the man said, his deep voice as smooth and sinful as his looks. Yet beneath his delicious exterior, something about him put me on edge. The hint of arrogance in his eyes and the sharp flare of power as he walked in the room were instant triggers. This guy wasn’t a mere mortal. He was something else, but I couldn’t put my finger on what. Aside from Jessa, I’d never met anyone else with this level of power.

Maybe I needed to get out more.

Jessa cleared her throat, as captivated by him as I was by the sound of it. “I’m the owner.” Her voice hit all the sultry tones and she swayed her shoulders. “Can I help you?” I wished I could pull her aside and tell her my feelings, but that would look way too awkward.

“We spoke over the phone. I’m interested in the potion.” He leaned his hip against the counter, standing only a couple feet away. Too close for comfort.

Since Jessa had business to take care of, I sidestepped toward the wall of ingredients, but Jessa grabbed my wrist, keeping me beside her. I cast her a dirty look, but she didn’t pay me any attention, focusing her gaze instead on Mr. Way-Too-Sexy.

“Right, I don’t have any of that in right now, but this woman makes some of the best healing salves I’ve seen.” Jessa nudged me forward, nearly throwing me into Mr. Sexy’s arms.

Glancing up his body to his eyes from so close strained my neck. My five-foot-six frame probably looked tiny beside him. An overwhelming sense of lust and intimidation washed over me.

“Hi.” I fought against a shiver.

Sarah Mäkelä loves her fiction dark, magical, and passionate. She is a paranormal romance author, but she’s written all over the romance spectrum with cyberpunk, sci-fi, fantasy, urban fantasy...even a sweet contemporary romance!

A life-long paranormal fan, she still sleeps with a night-light. In her spare time, she reads sexy books, watches scary movies (and Ghost Adventures), and plays computer games with her husband. When she gets the chance, she loves traveling the world too.