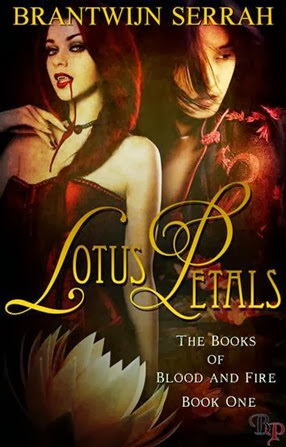 Book Info-
Title: Lotus Petals
Author : Brantwijn Serrah
Genre: Paranormal/Historical/Erotic Romance
Audience: Adult
Formats: E-book
Publisher: Breathless Press
Cover By: Victoria Miller
Editor: Jayne Wolf
Pages: 111 pages
Expected Date of Publishing:
Jan 17, 2014
Blurb-
Aijyn, human slave to a ruthless vampire Lord, would never dare do anything to incur his wrath. Then, she fell in love... with his bride.
Excerpt-
Three vampires rested in the room occupied by the captain of the daimyo’s hunting party—all three of them awoke instantly when the little human oiran threw back the screen, shouting at them in furious Japanese. Without waiting for them to move, she strode boldly across the little space to come eye-to-eye with the captain himself as he struggled to come to his feet. At first they were so stunned by the mortal’s appearance none of the three knew what to do: Kazuo, the captain, finally registered her shrill accusations.
"You would poison the daimyo’s honored guest?" she shouted at him. "You would drug her with octopus venom and then humiliate her?"
Coming to his senses—they were slower in the daytime, vampires—Kazuo brought his hands down on her shoulders and lifted her off her feet. The sudden movement reminded her she had stepped into a tiger’s den—she stiffened in his grasp and sucked in a fearful breath.
"Since when does the human come into my rooms uninvited?" he snarled. Fear shook her—she fully expected he would hurt her, and rightfully so—but she did not give off.
"Rhiannon Donovan has drunk the venom of the blue-ring octopus," she said, her voice quavering but still strong. "Your huntsmen use it to paralyze and kill—one of them drugged the human she hunted, and she swallowed it with his blood!"
"You dare charge my men with such a disgraceful act? And for a gaijin slut?"
"What’s going on here?"
Kazuo looked up; his two servants followed his glance. In the doorway stood Nagisa, tall and elegant, wrapped in the gauzy silk of her azure sleeper’s yukata—she, too, must have been roused by the sound of Aijyn’s screams. Her cold eyes regarded each of them carefully.
"Aijyn," she said, the curiosity in her tone edged with danger. "What do you mean by disturbing the captain during his daytime rest?"
Kazuo shot a dangerous and warning glare at the human oiran, but Aijyn ignored it, desperate with fear.
"Nagisa-sama, the Councilwoman’s noble emissary was betrayed last night during the hunt," she said quickly; she’d never imagined one day it might be Nagisa, of all people, to save her from the fangs of an angry vampire.
"Rhiannon drank the blood of a human poisoned with octopus venom, and now she lies in her rooms injured and sick. They took her hair, Nagisa-sama! They’ve shorn her like a...like a rag boy!"
Nagisa’s poisonous eyes narrowed, her lips pressing into a thin line like the blade of a knife.
"Kazuo," she said, the word like a stone dropping into an empty well. "Put Aijyn down."
Kazuo stared, incredulous, at the graceful tayu. When he did not immediately comply, Nagisa strode into the room and grabbed him by the throat.
"Why, Kazuo-san," she growled sweetly. "I had no idea you had already become so bored with immortality. Seventy-three years, if I recall, and already you wish for our master to release your soulless carcass into oblivion."
Amazingly, Kazuo slowly backed down, quietly letting Aijyn go while his eyes remained furiously on Nagisa. His servants watched with silent awe as Nagisa continued, never breaking her hold on the captain’s neck.
"Aijyn-chan, you are surely aware you will suffer greatly, should this accusation prove false," the tayu said.
"I am quite sure of it, Nagisa-sama," Aijyn replied, bowing low. "I have heard the captain and his hunting party speak of the blow-darts they use to sting their human prey with the toxin. Kazuo-san has said the poison stings kin-born vampires as well; I am quite sure Rhiannon has swallowed it, and what reduced her to helplessness while her clothes were torn and her hair cut off."
"Please return to the rooms of our guest. Attend to her carefully—be sure these men did not force themselves on her body, as well. I will deal with Kazuo, and send word to the daimyo of this dishonorable conduct."
Aijyn felt cold all through her, and a dizzy giddiness swept through her mind. She had not even considered what she did—storming into one of the vampire’s nests!—and now she felt weak in the stomach. How had she even survived it?
Nagisa’s words echoed in her head: make sure the men had not forced themselves on Rhiannon’s body. How could she not have considered it or checked for signs of it, to see if Rhiannon had also been raped by these monsters?
"Aijyn-chan," Nagisa said again. Shaken from her daze, she nodded. Then she slipped quickly out of the room and found herself running, again, for Rhiannon. 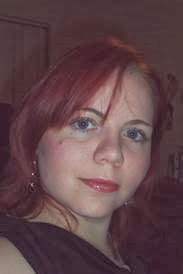 About the Author –
Sometime in early 2009, Brantwijn Serrah ran across an erotic novel in her local Barnes and Noble, and fell in love with the gorgeous geisha pictured on the cover. Sad to say, the book didn't live up to expectations. After one too many iterations of the phrase "his most honorable penis", Brantwijn decided to write her own story instead. The idea for Lotus Petals, the tale of a geisha seduced into the world of vampires, was born.
When she isn't visiting the worlds of immortals, demons, dragons and goblins, Brantwijn fills her time with artistic endeavors: sketching, painting, customizing My Little Ponies and sewing plushies for friends. She can't handle coffee unless there's enough cream and sugar to make it a milkshake, but try and sweeten her tea and she will never forgive you. She moonlights as a futon for four lazy cats, loves tabletop role-play games, and can spend hours watching Futurama, Claymore or Buffy the Vampire Slayer while she writes or draws.
In addition to Lotus Petals, Brantwijn has had several stories published in anthologies by Breathless Press, including the 2013 Crimson Anthology and 2014 Ravaged Anthology.  She's also had a short story published in the Cleiss Press Big Book of Orgasm, and hopes to have several more tales to tell as time goes on.  She has author pages on GoodReads and Amazon and loves to see reader comments on her work. Her short stories occasionally pop up at Foreplay and Fangs, her blog at http://brantwijn.blogspot.com.
Amazon / Facebook / Twitter / Blog / Goodreads